History – How it all began

Property sales started in Las Ramblas in the year 1997. Then the well known local building company “Urbanizadora Villamartin” began to promote the first apartment block. Now this block, called Lirios 1 is located oppostite the Las Ramblas Golf Club House. However, at the time of its construction the clubhouse was still not even planed. Instead there was only a quite humble Restaurant and a small sales office next to it. I actually worked as a sales manager out of this office in 1998/1998. This was just before we found the estate agency Magellan and this is one of the reasons for our profound knowledge of the resort and its property sales.

When Lirios block 1 was built, prices were still very low. The Costa Blanca property market just began to recover from a crisis in the early 90ties.  The Price for a two bed Apartment was under 9.000.000 Pesetas, an equivalent of 54.000 €.

Shortly afterwards the Promotors decided to proceed with a new Building area. In Residencial Altamira also Villas and a first Phase of townhouses were launched. The popular Villa model “Villa Carmen” (on a 300m2 plot) was available for 18.500.000 Pesetas (approx 112.000 €) those days. Soon Prices started to rise and so did the volume of building works. Purchasers came predominantly from Germany and Britain. Also a view Austrian, Dutch and Belgium Clients were amongst these Las Ramblas pioneers.

During the same time the Promotors decided to launch a group of apartments called “Los Claveles”. Whereas so far all promotions were kept in the traditional mediterrenean style, with Los Claveles an alternative was offered. First time a new architect was contracted (Luis Clavel – hence the name) and a modern style was introduced. Especially the bright orange shutters of phase one were quite remarkable in those days. Funny enough the color was not chosen intentionally, but due to a mistake with the color chart (They have used the number under the color instead of the one above). Due to their large terraces and good views these apartmenzs are still very popular.

During 1998 numbers of Sales started to explode. This lead to further price increases and severe delays of building works. I remember a lot of very unhappy purchasers, due to these problems. Finally everything got finished and most customers were very pleased with their properties.

We are here in Magellan Propeties – Las Ramblas Property Sales are still in contact with quite a few of these first purchasers. Some of them bought a second property or upgraded to a bigger one, as they decided to spend more time in Las Ramblas. Others used our services to sell and move back home mostly for personal reasons.

When Altamira was almost sold out in record time in 1999, the promotors decided to start with a large new building area called “Nuevas Villas”. It was during the last months before I left the company, when I saw the plans of the first villas in our sales office. As we still had no name for this phase I just wrote “Nuevas Villlas” on the plans on the wall. Funny enough, although it was never meant this way, the name stayed untill today.

With the beginning of the new millenium the property boom really took off. British purchasers started to dominate the market and little by little pushed the prices higher and higher. Their advantage was the high pound rate which was around 1,5 to the Euro. Soon purchasers from the euro zone bought less and less. As in Britain the hype for Spanish properties grew bigger and bigger, sales number were still increasing and new estate agencies were growing like mushrooms

Nuevas Villas was growing in record time and the promotors decided to contract large building companies like Ferrovial to keep up with the rythm of sales. Around 2001 property sales also sterted in the residential area La Feria (in today´s Calle Anfora). Like in Nuevas Villas the property offer stretched from Apartments and townhouses to detached Villas in first line golf.

The property market still knew just one direction and also Magellan,sl was growing.

The Community “El Lago” was the next to follow in 2003. At the same time the Promotors decided to expand their offer by introducing 4 large luxury villas called Tudemir, located to the right of El Lago. Already in Nuevas Villas this market was tested with the so far largest Villa Modell called Oriol. 3 villas of this type were built and sold in Nuevas Villas.

The Tudemir project however did not develop as expected. The experience of the Oriols showed, that there was no demand for really large Villas (or at least not for those ones). As a consequence the villa project was dropped. The outside shape stayed almost the same, but each villa was split into 6 apartments. As the original project was the one used for the buolding license. Purchasers had to wait for a while to get all their paperwork sorted.

Prices were still on the raise, but would soon hit the ceiling. In 2005 some Villas in La Feria were sold for around 800.000 €. In Almonte, the  typical 3 bed townhouse “Bungalow Buhardilla” was offered at 365.00 €. Almonte was actually the last release befoe the crisis. In fact a lot of properties in this residential area were sold “key in hand” for far lower prices after the crisis.

As we all know in 2007 the international economical crisis, had massive impact on the spanish property market. Sales literally stopped and prices began to drop and drop and drop….   It was not only the lack of demand. Another reason was the the dramatic drop of the British Pound, which allowed English owners to sell for a very loe “euro price”. They still ended up with an reaonable amount of Pounds.

For Magellan Properties this was also a hard time. We decided to close our seconf office on the Costa de Almeria and to really concentrate on Las Ramblas and surrounding urbanizations. On the other hand this situation  also cleaned put the market. In fact after a view years we were the only agency left in our closer area.

As fast as clients and agents adapted to the boom prices they also got used very quickly  to the new scenario with cuts of more than 50%. .Suddenly nobody could believe, that not long ago those high prices could have been achieved.

It took a whiel untill prices actually reached the bottom. I would say, that this happened aropund 2010/2011. Afterwards they slowly started to work their way up again.   Little by little new promotions appeared again. First only very few but soon more and more. This new beginning also introduced a complete change of building style. Whereas before the Mediterrenean style was absolutely dominant, now the modern clean design conquered the market.

In Las Ramblas Patrimi began to offer a small Promotion of apartments called Danubio.  This was built on a newly released plot in a privileged position on the highest point of Las Ramblas. It was the start of the new residential area called “El Farallon” with properties in modern design only. The Danubios are a modernized version of the before mentioned Tudemir apartments and are located to the left of the entrance of El Farallon. The next step was another promotion of Apartments called Sena and  a mixture of apartments and townhouses in the center part called Los Lagos. As sales increased again Sena II soon followed together with the first block of the so called Loira promotion just opposite the Danubios.

There are still some view residential plots left in Las Ramblas, but since 2018 we have not seen any further promotions being released in Las Ramblas.

We are hearing, that Trivee plans to start to build on a small hill at the very and of Altamira in the near future. However no derails have benn released yet. 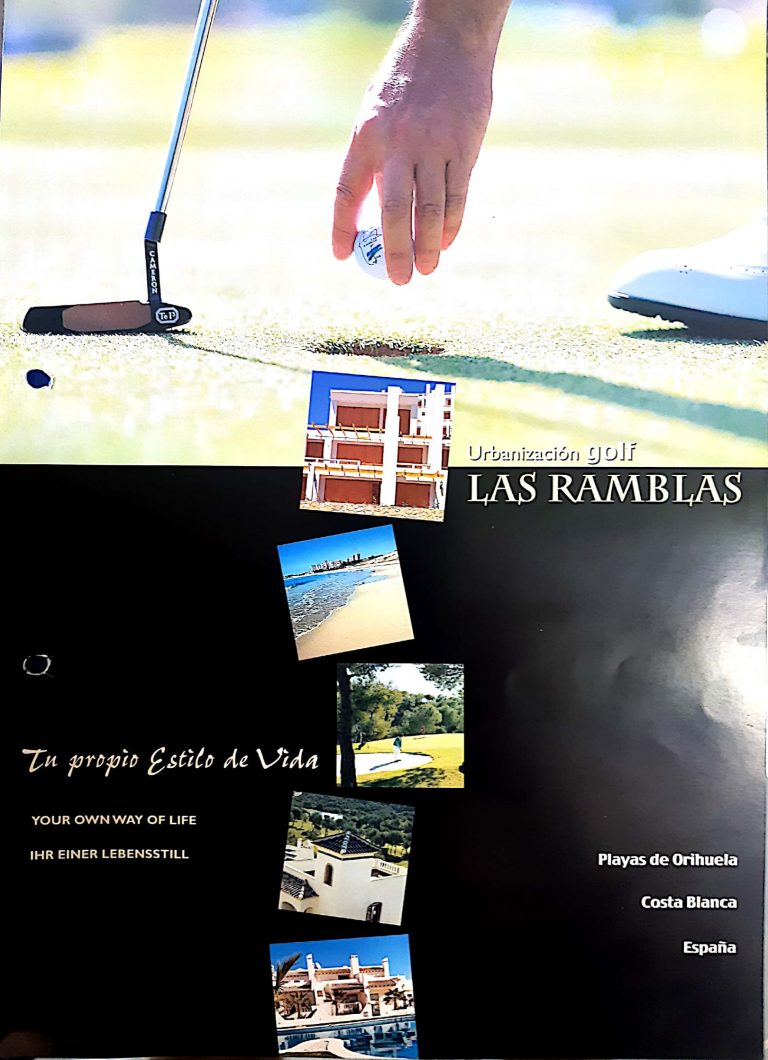